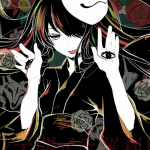 Mokou has a long running history of hatred for Kaguya ever since the moon princess humiliated Mokou's father by turning down his marriage proposal after she caused him to fail her trial of the Impossible Requests. Even though it has been over a thousand years since that happened, she continues to detest Kaguya, knowing full well that she can never get her revenge--nor can Kaguya ever put a permanent end to her. When not fighting with Kaguya though, she aids the nearby villagers by exterminating youkai and will even guide them safely to Eientei for medical treatment. She is a loner by nature and chooses not to socialize with humans or youkai and has a dubious personality that can easily switch from friendly to threatening and back again, but her actions seem to indicate she may be a good person.

This is the story about Sally and her missing waffle. Hope you enjoy!!!

Where Did It Happen: In the kitchen

Evidence: The letter B and black feathers next to the plate where the waffle was sitting on.

THE DAY OF THE CRIME:

" Ring!!!!! " Sally's alarm clock ranged. She slightly opened her eyes and yawned. The alarm clock was still ringing the same tune. Sally picked up the the ringing object and threw it out the window. " Meow !!" The alarm clock landed on a cat outside her window. She got out of bed quickly and darted downstairs. "MAMA !!!!! SALLY WANTS WAFFLES !!!!! " She screamed furiously as the windows shattered and the whole house shook wildly. Papa Acachalla slammed down the newspaper and growled. " Sally! How many times do I have to tell you!? DON'T YELL WAFFLES IN THE HOUSE! I already have my eardrums burst when Batman was singing his theme song! " "But Daddy, Sally really love to yell out waffles! " Sally pouted. Papa looked at her and then went back to his newspapers. Sally sighed and then stomped to the kitchen. Gertrude Acachalla was already in the kitchen making waffles. " Oh! Hey honey, how's your sleep ?" She smiled at the child. Sally grinned at her and answered." It was fine,Mama! " Gertrude handed her a plate with ONE waffle on it and a cup of orange juice. Even though it was only ONE waffle on the plate, One waffle is better than none. Sally went and sat at the square table, she was ready to devour that single waffle! But wait, something is missing! Sally looked down at her legs and frowned. ' I forgot my pink tutu! ' She thought and darted upstairs.

When the crime has happened on the day, the Acachalla family was put into an questioning room separately.

Papa Acachalla was the first one to be pulled into the questioning chamber.

" So tell me,Mr.Acachawa..." A detective questioned,but was interrupted by Papa. " It's PAPA ACACHALLAA not Mr.Acachawa,you dimwit! " Papa corrected. The detective coughed and went back to the question. " Okey Papa Acachalla, is it? Where were you on the day of the crime?" Papa hesitated a little. " I-I was... in the living room reading the newspaper. " He answered. " AND ...!" The detective didn't looked convinced."Gulp..." Papa gulped and fixed his tie. " What else did you do that day???" The detective asked another question. Papa was sweating a lot now like something he wasn't telling the detective. " I...was watching..." "Watching what?" The detective was losing his patience. Papa has to confess or he will be guilty! " I WAS WATCHING FROZEN!!!!!" He confessed." WHAT THE FROZEN THAT IS BANNED IN THIS COUNTRY?!" The detective questioned, Papa quickly shook is head and he handcuffed to the chair by the detective.

PAPA HAS BEEN BEEN CALLED GUILTY BY 1ST CLASS DETECTIVE: HE WATCHED A FORBIDDEN DISNEY MOVIE CALLED FROZEN!!!!

The days went by and none of the other family members were not found guilty.

Gertrude: She was washing the dishes while listening to classical music and claimed that she did NOT see the culprit.

Spencer: He was locked in Acachalla Family basement

Billy: He was on a date with Maddie Friend

"THE CULPRIT WAS NOT FOUND AND THE CASE WILL BE ABANDONED DUE TO LACK OF EVIDENCE: AFTERMATH" ---FROM THE NEWSPAPER

" Is there anything else you want to clarify,Miss Sally? " Detective Lollipop questioned while looking at her and sipping on a cup of Cherry Bomb tea. "No..." Sally answered in a dead tone. Lollipop sighed, getting out of his sit and walked over to her. " It'll be okey." He patted her shoulder gently and left the room. Sally looked down at her bruised fingers and started to cry a little.

Even though, there was a good amount of evidence...the detectives were too lazy to find the culprit! They thought the case was not very serious!!!!

ATTENTION: IF YOU WANT TO KNOW WHO WAS THE CULPRIT, LEAVE A COMMENT!!!

Retrieved from "https://ultimo.fandom.com/wiki/User:Fujiwara-chan?oldid=16568"
Community content is available under CC-BY-SA unless otherwise noted.