"Good's power is for protecting others...but evil's power is only for themselves!"
― Service to Désir[src]

Service (セルヴィス Seruvisu) is a part of a newer generation of Karakuri Dôji, whose function is to fill in the gaps in “good” and “evil”, left by Ultimo and Vice respectively.

He is a member of “The Six Perfections” and, as such, is one of the strongest “good” dôji seated below Ultimo.

Service is a sky blue-themed dôji. His features consist of medium-short blue hair, golden eyes with golden pupils, and a large blue transparent visor that looks like a bow on the top of his head.

The clothes he wears are of the highest quality, featuring a sleeveless black crop top, exposing a large portion of his abdomen, and a white hakama that is tied using a white sash (obi). The large piece of blue fabric that hangs from the center of this sash, is embellished with the image of two white circles merged together with two circular cutouts and a small diamond under the cliff of the circles, resembling a sparrow face. Outwardly, only two large and rounded, light blue mechanical gauntlets with flower designs on his arms belies the fact that he isn't human.

After performing the Pledge Ritual with his master, Service's Robot Crest (Karakuri Mon) appears, surrounding the entirety of his master's right forearm, taking the form of an ornate sparrow.

Reflecting his virtue of charity, Service is always ready and eager to help, with a bright, spunky, and optimistic attitude. He takes pride in his skills and is happy to show them off when he gets the chance. Service is blunt, saying whatever is on his mind, even if it's negative or insulting.

Service shares a close relationship with his master and admires Yoichi's deep love for everyone around him, which allows him to heal quickly and recharges his energy. They have a casual and comfortable relationship, with Service affectionately calling Yoichi "oldie".

As Service is a robot, he has displayed far greater physical strength, resilience and agility than those possessed by a normal human.

Service's Noh power is power manipulation, allowing him to manipulate and control the Noh powers of any dôji within a specified area. This includes affecting the Noh's energy output, changing it's effects, or canceling it all together. It's greatest effect is the ability to actually use other Noh powers as long as they are nearby, but to a limited degree - as seen when Service used Ultimo's Space-Time Manipulation to reattach Yamato Agari's arm, but could not use it any further.

It requires prior range setting and a significant amount of energy to use, so Service can't use is too often unless his master has a strong love that lets him recharges quickly.

God Service is a full body ICON transformation which simultaneously alters Service's form, while integrating Yoichi into this new shape, using the Robot Crest to initiate the technique by previously establishing direct contact with Service. Service becomes larger with angular-shaped legs and hands, and a light-color sash over his lower section. Due to the size of his legs, God Service's dark-colored feet are barely visible and three spikes protrudes from his legs. His face greatly sunken in and frame by a helmet that resembles a bird's beak and a smaller beak-like spike sticks out from his chest.

Yoichi God Service is a full body Level 2 ICON transformation that alters Service's form once the master and dôji's will reach a unification of 95% or higher, unlocking his most powerful form. This ICON appears more complex and streamlined than Service's usual ICON, with his gauntlets become slimmer and more proportioned to his body, and his beak-like helmet shorter and gains a visor over his face. His legs are no longer hidden beneath large armor and his feet become heel-like. A shield-like protrusion stick off of his left arm and has similar armor attached to both his legs. He wears a short dark stash on his lower section and also obtains a short sword resembles a scimitar to use as a weapon. When combined with his allies, Yoichi God Service forms the left arm's shield of God Ultimo Frontal Till Dawn. 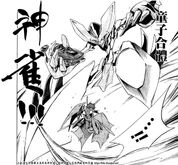 Yoichi God Service
Add a photo to this gallery

Retrieved from "https://ultimo.fandom.com/wiki/Service?oldid=19531"
Community content is available under CC-BY-SA unless otherwise noted.