"Shut your mouth and show me that arm."
―Pardonner, to Yamato[src]

Pardonner (パルドネ Parudone), also known as Pardone, is a part of a newer generation of Karakuri Dôji, whose function is to fill in the gaps in “good” and “evil”, left by Ultimo and Vice respectively.

He is a member of “The Six Perfections” and as such, is one of the strongest “good” dôji seated below Ultimo.

Pardonner is a light aqua blue-theme dôji, which his features consist of dark hair styled in an A-line bob haircut and blue eyes that match with his two large, rounded blue visors frames on either side of his head. The clothes that he wears are of the highest quality, featuring both a white kimono, with sleeves that seem to be tucked into his gauntlets, and a white sashinuki hakama, that blouses outwards near the ankles. A large, sky blue apron, tied three times at the back, obscures the majority of his form and is embellished with the images of three simple white butterflies placed centrally near the apron's base. Outwardly, only his two blue, large gauntlets belie the fact that he isn't human.

From Chapter 10 to Chapter 12, he loses the large apron concealing his form, adopting a far more typical appearance among the dôji. The hakama covering his legs also alters to the more standard variant, gaining the common sash and descending piece of fabric, which depicts a dark emblem reminiscent of large butterfly's four wings, and a small dark shirt similar to Ultimo's covers his chest.

In the past, Pardonner is dressed in a dark, standard soldier uniform as his masters participated in a war as doctors. In the 21st Century, a human form Pardonner dressed in sailor-style outfit to fit his master, Kiyose Matsumoto's rich lifestyle. When he adapts a more typical human form, his hair streaks are softer than his usual sharp, A-line bob. 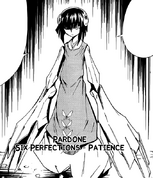 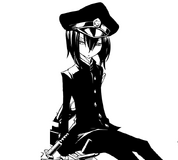 Human Pardonner (Color)
Add a photo to this gallery

After performing the Pledge Ritual with his master, Pardonner's Robot Crest (Karakuri Mon) appears, surrounding the entirety of his master's right forearm, taking the form of an tribal-style ornate butterfly.

According to the data profiles, being the embodiment of patience, Pardonner possess the highly enduring quality to withstand insult and have an undisturbed heart, befitting his virtue. He has incredibly forgiving nature, but this forgiveness does not exactly equate to Pardonner's manners. Pardonner is often displayed as being disrespectful and blunt to others, signified by a both rude and abrasive attitude, especially in regards to Yamato Agari. At Yamato's first glance, he was shown to be reluctant in believing that Pardonner was one of the good dōji because his rudeness.

Like his former master Koun Shakujii, Pardonner willing to heal anyone he can with his Noh and never his personal feelings get in the way of saving his patient, such as when he healed Jun Chichibu on Rune Kodaira's request, despite knowing he's the enemy.

Pardonner is one of the more serious and stoic of the dôji, not showing any signs of enthusiasm, and even during a battle the most emotion he displays is a scowl. He also possesses keen observation and intelligence, as he was able to tell that it was Vice that hurt Jun from looking at his wounds and quickly deduce why Rune would want to keep him alive.

A doctor from the 21st century, who had been the master of Pardonner since his first master, Kiyose, died in WWII 70 years ago. Pardonner had a very high respect for him, shown when he was patiently listening to Shakujii chastise him after he openly insults Yamato. Pardonner knew Shakujii even before he become his master due to Kiyose worked alongside him in the past, and he even calls Shakujii "Shakujii-sensei". When Shakujii was fatally stabbed by Vice, Pardonner was in such shock that he couldn't counter-attack against Vice when he attacked him next.

Having been with Shakujii far longer than Kiyose's past self, Pardonner seems to be emotionally closer to Shakujii than Kiyose. At the end series, after Roger Dunstan rewind time and brought Shakujii back to life, Pardonner continues to look after his former master and take care of him at a retirement home.

Like other members of The Good Dôji Club, Pardonner seems to dislike Yamato, and is openly rude and critical of him. Some examples are when he tells Yamato "Shut your mouth and show me that arm" when he was complaining, and frequently calls Yamato a "dimwit" or an "idiot". He seems to have little patience for Yamato, and is the quickest to degrade him even in a happy situation.

In the past, Pardonner was given to Kiyose by Roger Dunstan when she was a medical student. He assisted her in a war with his healing ability as she was a doctor. As a cover, Pardonner posed as her "weak, lean little brother", but when Kiyose died, Pardonner moved on to Shakujii.

After the death of Shakujii, Pardonner chooses the 21th century Kiyose as his new master. In the 21st Century, Pardonner is very nonchalant towards her and finds her formality a bit awkward. Pardonner serves as the cynic and voice of reason to Kiyose's more trusting and flustered nature, but remains faithful to her by listening to her requests and staying by her side.

As Pardonner is a robot, he has displayed far greater physical strength, resilience and agility than those possessed by a normal human.

Pardonner's Noh Power allows him to heal even the most severe of injuries on whoever he wishes, restoring a person back to full health. By speeding the body on a cellular level, the technique has been proven to be extremely effective, such as quickly regenerating a bone-deep cut that Yamato receives from Jealous.

Pardonner has been seen to be able to create surgical tools from his hands. Pardonner also possesses a developed form of X-ray vision, allowing him to easily observe the condition of any individual's bones and tissue, further aiding his healing capacities. Pardonner can also tell when people are lying because their heart rate increases and secrete certain substances from their bodies

While it is effective against fatal injuries which people would otherwise die from, this Noh power cannot bring the dead back to life as it only affects physical injuries and cannot reactivate the body.

Many characters notes the huge advantage of having Pardonner's Noh, but Jealous points out that this Noh is more of a support type ability because it's not very efficient in battle.

God Pardonner is a full body ICON transformation which simultaneously alters Pardonner's form, while integrating Kiyose into this new shape, using the Robot Crest to initiate the technique by previously establishing direct contact with Pardonner. This ICON takes a butterfly-like form, with antennaes on his brow and dark plating on the side the helmet to resembles bug eyes. Pardonner has slender body-shape with his chest wrap in armor the looks like bug feelers, has heel-like feet, and wears a dark sash over his lower section. The arms maintains the shape of Pardonner's normal gauntlets, but are cover with armor that wraps around the forearm and curve outward behind the body to resembles butterfly wings.

Kiyose God Pardonner is a full body ICON Level 2 transformation that alters Pardonner's form once the master and dôji's will reach a unification of 95% or higher, unlocking his most powerful form. This ICON appears more complex and streamlined, and is possibly the most dramatic change of all the doji, due to the change in masters. Pardonner gains more armor, with his gauntlets and leg armor much larger and more rounded. His heel-like feet also scales up in volume and size as well, though his hands become smaller and uniformed. The bug-like armor plating and antennas on his head and chest becomes larger and more stylized. He wears noticeable shorter dark sash over his lower section, gains a pair of butterfly-like wings on his back, and a pair of sai blades to use as weapons. When combined with his allies, Kiyose God Pardonner forms the wings for God Ultimo Frontal Till Dawn.

Kiyose God Pardonner
Add a photo to this gallery

Retrieved from "https://ultimo.fandom.com/wiki/Pardonner?oldid=19550"
Community content is available under CC-BY-SA unless otherwise noted.